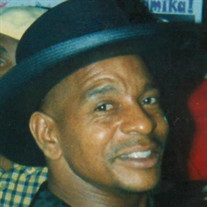 Theotis Coleman was born June 12, 1957, in Tupelo, Mississippi to the late union of Louis and Otis Coleman (who both preceded him in death). Theotis affectionately known as “Odie” was born in Mississippi but moved to Chicago at an early age where he attended Sherwood Elementary School on the southside. Although he was born in Chicago, Mississippi is where he captured the love of sports but mostly baseball. Theotis was overjoyed when the New York Yankees won the World Series last year. He also loved the Dallas Cowboys just as much. Theotis had so much love for baseball that his four boys grew up loving and playing the sport as well. Theotis moved back to Mississippi as a teen where he continued to grow. While in his early 20’s he started working for F.L Crane and Sons. F.L Crane and Sons is where his life took a drastic turn for him, he was in a horrific accident that left him paralyzed from the waist down. To say that Theotis was a unique person would certainly be an understatement and he never let his disability discourage him. He had a boisterous personality, a heart BIG with laughter and a smile to match. He was also someone who didn't mind speaking his mind, you had to have thick skin to be around him. However, you didn't have to be around Theotis long before you figured out that most important to him was family. His heart was so big with love he had room in it for everybody. We will always remember the love he expressed towards his family, friends and all who knew him. On January 18, 2021 God needed more laughter and fun in heaven so he called Theotis home. God was ready to relieve him of all the pain that he endured for so many years. His big sister Rose, aunt Jimmie, aunt Doris, and uncle Jimmy will be waiting on him with open arms in heaven. Theotis leaves to cherish his memory his four sons: Dyonne, Demond, Darrius and Nate. Eight grandchildren Dashia, Dartyen, Dyquez, Olivia, Georgia, Chy’Kyra, Makenzie, and Micah. Four aunts Martha, Mary, (Jimmie/Puddin and Doris who preceded in death) and one uncle Jimmy. Three sisters Rose(preceded in death) Jean and Laura Ann. Two brothers Eric and Johnny. A host of nieces, nephews, cousins and friends who love and will miss him dearly.

Theotis Coleman was born June 12, 1957, in Tupelo, Mississippi to the late union of Louis and Otis Coleman (who both preceded him in death). Theotis affectionately known as &#8220;Odie&#8221; was born in Mississippi but moved to Chicago at... View Obituary & Service Information

The family of Theotis Coleman created this Life Tributes page to make it easy to share your memories.

Send flowers to the Coleman family.