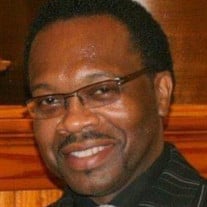 “I am the resurrection, and the life: he that believeth in me, though he were dead, yet shall he live: And whosoever liveth and believeth in me shall never die.”-John 11:25-26 Our beloved, Norris Andrus Lipsey was born February 19, 1963. Norris was the fourth child born to the Late Willie Lipsey Sr. and Ruth Lipsey of Camden, MS. Norris was united with New Zion MB Church where his love for ministry and music began. Norris joined the military and was stationed in Germany. After his service in the military, Norris observed that his children were talented enough to form a singing group. He named the group and founded, “Norris Lipsey and The Faith Garden Singers”. Norris and the FGS sung Gospel Music all over the East Coast, BET Soundstage, and Atlanta Live. The Faith Garden Singers recorded 3 albums with structured contemporary music, “Born Again, My Early Morning Sunshine, and Fire Burning On The Inside. The Faith Garden Singers performed at many churches, festivals, fairs, conferences and occasions all around the East Coast. While taking the steps to become an Artist, he supplemented his college career and acquired his Bachelor’s, Master’s and Doctoral Degrees. Throughout the years, Norris has worked in many areas such as merchandising, import-export, insurance, and real estate investing. For the last number of years, Norris has worked in the Mental Health Field as a Substance Abuse Counselor, Behavioral Health Counselor and Mental Health Professional. In his last years, Norris was also known as Dk. Dru. He was recently (2021) nominated for a Stellar Award for the Single “Man From Galilee”, with Dk. Dru featuring Bishop Rance Allen, Paul Porter, Chris Byrd & True Victory for Traditional Duo/Chorus Group of The Year. On January 25, 2022, Norris was called home to be with the LORD for eternity. Norris leaves to cherish his memories: his loving mother Mrs. Ruth Lipsey of Plantersville, MS; Three Siblings: Charles (Earnestine) Lipsey of Atlanta, Priscilla Heard of Tupelo, MS and Veronica Lipsey of Atlanta Four children: Monique Lipsey McClendon and Jamil (Ebony) McLean of North Carolina, Norrel (Rush) Lipsey of Dubai (UAE) United Arab of Emirates, and Andrew McKoy of North Carolina Norris had 8 grandchildren and a special friend, Jonquettee McKoy. A host of nieces, nephews, cousins, close relatives and friends. Norris’s, father Willie Lipsey Sr. and brother Willie Lipsey Jr., proceeded him in death.

&#8220;I am the resurrection, and the life: he that believeth in me, though he were dead, yet shall he live: And whosoever liveth and believeth in me shall never die.&#8221;-John 11:25-26 Our beloved, Norris Andrus Lipsey was born February... View Obituary & Service Information

“I am the resurrection, and the life: he that believeth in me,...

Send flowers to the Lipsey family.