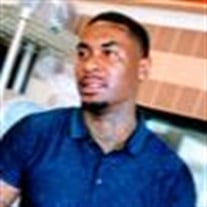 Mario was born November 16th, 1987 to Kimberly Renee Jameison in Tupelo, Mississippi. Although he spent his early years in Tupelo, at the age of 2 he moved with his mother to Atlanta, GA. While in Atlanta, Mario attended North Clayton Middle school and North Clayton High school. Here is where young Mario came out of his shell. While running with a circle of friends with colorful names like C White, Brian and Blacc Jack, Mario took on the name Scadamean. Mario, or simply Rio by family and Scadamean as he was often called by his street name, had a great love and passion for music. In height of the rap culture era, he carved a niched for himself as quick witted, streetwise, freestyling Godfather. Usually with songs and quips he would often glorify life on the streets. But always reminded his mother when he makes it big, he was going to buy her house and her own soul food restaurant. In 2006 he met Lashawndrea King (Shonda) and they both welcome their first-born child together Kayla Renee Jameson. Although Mario’s heart belongs to all three of his kids him and Kayla held a sacred bond, she was Mario best friend he could basically tell Kayla his best friend secrets. Mario installed in Kayla routinely “ That courage is not the absence of fear, but rather the judgment that something else is more important than fear. The brave may not live forever, but the cautious do not live at all. From now on, you’ll be traveling the road between who you think you are and who you can be. The key Kayla is to allow yourself to make the journey”. Mario always let Kayla know how much he loved her and her mother which he would call (My baby mama) and thank her for the gift of Kayla she bestowed to the both of them. In 2012 Mario met Lekita Johnson( Kita) at a house party that was given by mutual friends. From there Mario and Kita were inspectable where you see one you seen the other this was how strong their love was for one another two souls intertwined as one. Kita blessed Mario with his second daughter Gabriella Nevaeh Jamesion and 4 years later Kita blessed Mario with his only and first-born son Mario Perez Jameison Jr. Mario love for Gabby and Junior was a cup that runneth over. Forever taking pictures and facetiming with them and spending daddy quality time and make sure there was no separation between Kayla, Gabby and Junior. Mario motto for his three hearts was: You are pounds of potential, the numbers does not make you anything except that weight. That number does not dictate your actions, nor does it control your actions, nor does it control your mind. The number does not make you better or worse of a person nor does it equate to beauty. You are pounds of potential and you can control your attitude you have pounds of potential to influence others. You have pounds of potential and you can work hard and be a positive person. You can’t reach your potential without action. Action requires movement and energy with a gracious smile. Remember Kayla Gabby and Junior go out and be amazing because your Daddy was amazing because he came from an “Amazing fearfully made woman”. And most of all my “Three Hearts” Your number of potentials doesn’t control how much I love you Three Daddy! Mario is proceeded in death by his Grandfather Robert (Bobby) Jameison, and Grandmother Earnestine Wise. Sadly, in the early morning hours of January 21st, 2021 Mario Perez Jameison was called home. He leaves to mourn, his Mother Kimberly Renee Jameison Booker, Daughters: Kayla Renee Jamesion, Gabriella Nevaeh Jamison, Son: Marion Perez Jamesion Jr. Brother: Tyson Funches Aunts: Barbara Deborah, Cassandra, Shavonne, Mother of the children: Lashawndrea King, Lekita Johnson a Host of cousins: Tracia, (Cortney )Evan, Lorenzo, Brandon, Angel, Deshawn, and a host of special friends: Joy Wyatt, and his extend Atlanta family and music fans of Atlanta Ga. Mario (Rio) Scadamean you will forever be in our Hearts! You are now free to fly high and take your seat at Gods table! We love you!

Mario was born November 16th, 1987 to Kimberly Renee Jameison in Tupelo, Mississippi. Although he spent his early years in Tupelo, at the age of 2 he moved with his mother to Atlanta, GA. While in Atlanta, Mario attended North Clayton Middle... View Obituary & Service Information

Send flowers to the Jameison family.