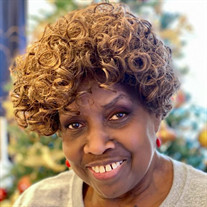 Mablean Ann (King) Grigsby was born on February 22, 1946, in Tupelo, Mississippi and transitioned to heaven on Sunday, October 24, 2021. Mablean was the daughter of Rev. Caldwell King and Anne Mae (Crayton) King. At a very early age, Mablean professed her faith in Jesus Christ and joined Hopewell Missionary Baptist Church where she faithfully served as a member for nearly fifty (50) years. As a member of Hopewell, Mablean served in numerous ministerial capacities including being President of the Usher Board, Missionary Society, Program Committee and participated, and directed, many youth church programs and activities. One of Mablean’s most enjoyable and rewarding duties was serving the adult congregation as their Sunday School teacher. Later in life, Mablean became an active church member in Inspirational Community Baptist Church. Once again, Mablean was able to share her love of Jesus Christ through teaching Bible Class and Sunday School. Additionally, in obedience to the Holy Spirit, Mablean began Marathoners Ministry at ICBC. Mablean also a member of the Culinary Ministry, Program Ministry and a member of the ICBC Adult Choir. Mablean was united in marriage to Otha Charles Grigsby on May 24, 1966. To this union, two sons were born: Keithon Charles Grigsby (Patrizia) and Kenneth Jermaine Grigsby (Kathleen). Her husband, Otha, preceded her in death in August 1995. For the last 26 years, Mablean had been entrusted with one of the titles she cherished most – being a proud grandmother. Mablean was relentlessly and lovingly supportive of her two grandchildren: Jewlyus Charles Grigsby and Taylor Justice Grigsby. At an early age, Mablean distinguished herself as a natural leader and scholar. Mablean graduated from Belden High School in 1962 where she was named valedictorian of her graduating class. Following high school, Mablean matriculated to Alcorn State University, majoring in home economics. After receiving her bachelor’s degree, Mablean returned home to teach in Lee County School District at Nettleton High School while, simultaneously, pursuing her master’s degree at Mississippi University for Women in Education. Later, Mablean became an instructor working for the Tupelo Public School District at Carver High School and, subsequently, Tupelo Vocational and Technical Center. As the Food Services Director, Mablean quickly distinguished herself as both an exemplary teacher and district leader. Her classroom instructional successes led her to be named both Vo-Tech teacher of the year and, later, Tupelo Public School Teacher of the Year. Mablean also led her students to numerous individual and team championships in Food Service at the state, regional and national levels. Mablean once again returned back to school to receive her Master’s degree in Counseling Education from the University of Mississippi. For 12 years, Mablean served as the school counselor for Milam Middle School. Mablean was a relentless advocate for teachers across the state of Mississippi. Mablean served as President of the Tupelo Association of Educators and was a long serving member on the Board of Directors for the Mississippi Association of Educators. In addition to being a devoted educator, Mablean was a tireless community servant which led her to be involved in numerous religious and civic activities. Mablean was a member of the Heroines of Jericho and the Waymakers, a women’s social club, the Lee County Alcorn State University Alumni Association and the Lee County NAACP. Mablean served as Vice-Chairman of the Lee County Democratic Committee and later a member of the State Committee for the Mississippi Democratic Party. In addition to her children and grandchildren, Mablean is survived by her brother, Melvin Caldwell King, Jr. (Deborah) of Pittsburgh, CA, sister Dorothy Leasy (Joseph) of Belden, MS, and brother Rev. Marlin Bennett King, Sr. of Jackson, Mississippi and a host of nieces, nephews, cousins, and friends. Mablean was preceded in death by her husband, Otha, her brother, James King, Sr., sister, Linda Witherspoon, and brother, Rev. Bobby Walter King.

Send flowers to the Grigsby family.