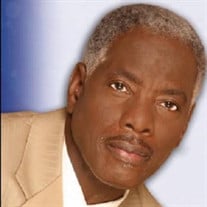 Lee Andrew Williams, 75, passed away Monday, August 30, 2021, at his home in Tupelo, MS surrounded by his family. He was born on July 28, 1946, in Tupelo, Mississippi to the late Cornelia Cummings and the late Arzo Barnes. As a young boy, he enjoyed playing basketball and baseball in school and outside of school. He also loved wrestling, playing marbles and was known as the family prankster, very mischievous. He often enjoyed a great laugh and making others laugh; usually being the source of the laughter. Because of his ability to make others laugh and his laid-back personality, he had lots of friends growing up. Lee accepted Christ at an early age and joined New Lebanon Baptist Church, where he sang in the choir and played the piano. Lee was an honor graduate and class salutatorian of the Class of 1964 at Belden High School. Because of his academic excellence, he graduated one year early with his brother, Robert. After graduation, he enlisted in the U.S. Army, where he was stationed in Austria. He also had the opportunity to travel to Greece while serving our country. Lee married Annie Ruth Vaughn in 1971 and from this union came five children: Pamela, Orlanda, Carilus, Ceasus and Fanesha. He was a loving husband and a caring father. He worked for McGraw-Edison Manufacturing, then for Malone & Hyde and Morris Sales as a truck driver for many years before his life-long career in gospel music began. Lee began singing gospel music at the age of six, when his uncle, Mitchell Thornton, a member of the Gospel Stars, formed the group: the Gospel Stars Juniors, featuring Lee and his three brothers: Willie, Robert and Frank. Singing around the house and in the community finally paid off for these young boys. Later, their uncle, Mitchell Thornton, formed The Spiritual QC's (Qualified Christian Singers) comprised of a variety of gospel singers. After some of them relocated, Lee's oldest brother, Willie Thornton, restarted the group after they broke up in 1968 and took the name for their own group in which Lee played the bass guitar. He continued to sing and travel the world spreading the word through gospel music. After three decades of recording and traveling, in 1996, The Spiritual QC's recorded their first album, "Jesus is Alive and Well.” It wasn’t until the release of the second album in 1998, "Love Will Go All the Way" that the group was renamed to Lee Williams and The Spiritual QC's. This album threw Lee Williams and the Spiritual QC’s into the gospel music spotlight and earned them their first national hit, “I’ve Learned to Lean,” an upbeat hand-clapper of a tune that showcased Lee’s powerful vocals and spearheaded a string of successful albums throughout the 1990s and 2000s. Other accolades include Lee being featured on the hit song, "Cooling Water" with the legendary Williams Brothers, Melvin and Doug in 1997. Lee Williams and The Spiritual QC's would record and tour the nation nearly 50 weeks a year, touching fans with his caring personality. Lee was known for his distinct voice and unique stage presence and never failed to deliver a soul stirring performance, while leaving his all on the stage every time. His deep baritone voice and cool stoic style moved the crowd as he stood still in one spot singing until the power of the Lord came down. He was a gentle soul who would sign autographs and take photos with fans for hours before and after each performance. Lee Williams and The Spiritual QC's recorded six more records; having several hits peak on the Top Ten and Top Five of Billboard gospel music charts, won 10 Stellar Awards (and was presented with the Stellar Awards’ prestigious James Cleveland Lifetime Achievement Award in 2010), earned a Soul Train Award for Best Gospel Album of the Year, and was named the Gospel Music Excellence Awards’ Traditional Quartet of the Year in 2011. Lee was also given the Mississippi Trailblazer Award. Dr. Lee Williams, the beloved quartet frontman of the Spiritual QC’s, received the Honorary Doctorate of Sacred Music from Bible Believers Christian College in California June 2016. After sixty-seven years of being the primary lead singer and songwriter, Lee retired from public performances in 2018 in his hometown of Tupelo, MS, where it all began. In July of that year, the city of Tupelo celebrated both his career and retirement with a public celebration, during which he was presented with the key to the city. Lee Williams and The Spiritual QC's became one of the most in-demand quartet gospel groups of all time. He leaves to celebrate his life and continue his legacy, his faithful and loving wife Annie Ruth Williams and their five beautiful children: Pamela (Darrell) Williams, Orlanda "Sac" Williams, Carilus "C.C." Williams, Ceasus "Javon" (Shanetta) Williams and Fanesha "Shanay" (Adarius) Traylor; his children: Rodrick Bailey, Sonya Madden, Melissia (Patrick) McCoy, Kimberlee Ford and Roosevelt (Shanna) Ford; his grandchildren, his great-grandchildren, his brothers: Willie (Dorothy) Thornton, Robert (Verna) Thornton, T.C. (Pamela) Cummings and Willie C. Barnes; his sisters: Mary Williams, Vera Nabors, Wanda (Leo) Wells, Perceta (Chris) Berry and Syrenthia (Arthur) Arnold; his uncles: Joseph Thornton, Samuel (Bessie) Thornton and Mitchell (Marie) Thornton and a host of nieces, nephews, cousins, friends and fans. He was preceded in death by his mother: Cornelia Cummings, his father: Arzo Barnes, his grandson: LaQuintray Williams; his stepfather: Tom Cummings, Sr., his brother: Frank Williams and his sister: Danita Spearman. Funeral services will be held Sunday, September 12, 2021, at BancorpSouth Arena, 375 East Main Street, Tupelo, MS 38804 at 1:00 p.m. Prior to the services, public walk-through viewing will be held from 10:30 a.m. to 12:00 p.m.

Lee Andrew Williams, 75, passed away Monday, August 30, 2021, at his home in Tupelo, MS surrounded by his family. He was born on July 28, 1946, in Tupelo, Mississippi to the late Cornelia Cummings and the late Arzo Barnes. As a young boy, he... View Obituary & Service Information

With deepest sympathy we remember Mr. Lee A. Williams...

Send flowers to the Williams family.