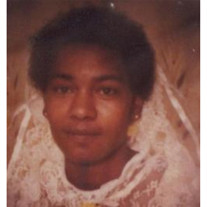 She was born May 16, 1958 to Katie Shack and John Metcalf. She joined Second Baptist Verona at an early age and later joined Rising Star M.B. Church under the leadership of Pastor Runney D. Patterson. She was a former employee of Ramada Inn... View Obituary & Service Information

The family of Glenda Triplett created this Life Tributes page to make it easy to share your memories.

Send flowers to the Triplett family.