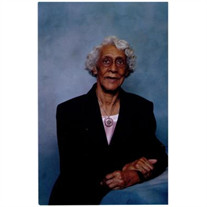 On November 22 1919 Eck and Georgia William Shumpert was blessed with a beautiful baby girl, they named her Evia, she was the seventh of eight children. She was blessed and wonderfully made. Evia was given back to the Lord at an early age, and continued her journey serving the Lord until death. She was baptized at Palestine United Methodist Church in Nettleton, MS. Evia married and moved away for a short while living in Chicago and Indiana. Upon returning back home she reconnected with her home church and there remained until death. Evia was a faithful member of Palestine and served in many areas in the church. She served as Communion Chairperson, Baptism Chairperson, Choir member, a United Methodist Woman, a member of the Pastor Parish Committee and many other capacities. Evia grew up and attended Nettleton school district. She loved people and never met a stranger. She loved working in the sewing factory where each day she looked forward to going to work and fellowshipping with the girls at HIS in Verona. She did this until age and health prevented her from continuing to work. In 1942, Evia united into wedlock with Levi Merritt and to this union two children were born, Lera and Jean. He preceded her in death. In 1951, she entered into holy wedlock with John Thomas Betts and shared 50 wonderful years together. To this union 5 children were born; Larry, John W., Jerry Wayne Betts, Georgia Sue, and Rea Ann. She leaves to cherish all these memories her loving children; Lera Jones, Willie Jean, Crayton (Robert), Larry (Ann) Betts, John W. (Eddie Jean) Betts, Georgia Sue (John) Harris, Rea Ann (Veshone) Shepherd; (19) Grand-Children and (32) Great Grand-Children; two sisters, Itha Collier of Mr. Clemon, MI and Letha Little of Fullerton CA; Two brothers, Herman (Pauletta) Shumpert of Tupelo, MS and Theron Shumpert of Chicago, IL; A very special sister-in-law Willie Sue Betts of Plantersville; A host of nieces, nephews, cousins, and friends. She was preceded in death by her husband John Thomas Betts, her parents Eck & Georgia William Shumpert, a son Jerry Wayne Betts, two brothers Samuel and Harold G. Shumpert and one sister Epora Shumpert Forester.

On November 22 1919 Eck and Georgia William Shumpert was blessed with a beautiful baby girl, they named her Evia, she was the seventh of eight children. She was blessed and wonderfully made. Evia was given back to the Lord at an early age, and... View Obituary & Service Information

The family of Evia Betts created this Life Tributes page to make it easy to share your memories.

On November 22 1919 Eck and Georgia William Shumpert was blessed...

Send flowers to the Betts family.