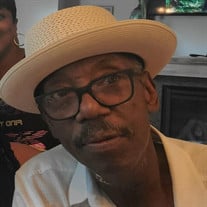 Edward “Ed” DePriest was born on January 29, 1944, to Ross DePriest Jr. and Martha Lee Givens DePriest. On the morning of March 26, 2022, Ed passed away peacefully at North Mississippi Medical Center. He was 78 years old. In his early years Ed worked for Toll Free Construction and Owen Cohen Fiberglass in Kansas City. This where he also developed his lifelong trades of concrete finishing and painting of what he did until his health started to decline. He was also the owner of Tap Out Lounge in Tupelo, MS. Ed loves spending time with his family. He was always telling jokes that had us laughing until our stomachs ached or telling a story that left you with the “did that really happen look?” He could make you laugh even if you were mad at him. Anyone that truly knew him knew he was not a pretender. He had a huge heart; he would give you anything even if it wasn't his to give. We are at peace just knowing that he is not in pain anymore. Ed was preceded in death by his parents Ross DePriest Jr. and Martha Lee Givens DePriest; his son Darrell DePriest; his grandson Heron Edwards, Jr.; sister Rebecca DePriest Edwards; brothers Shed Depriest and Roy DePriest. He leaves to cherish his memories his children Kimberly DePriest of Detroit MI, Arlette Sullivan of Kansas City, MO, Shonda Wilson Myers (Spencer) of Memphis, TN, Robin Edwina DePriest of Orange Park, FL; sisters Marjorie DePriest Brown, Florestine DePriest Gladney, Elizabeth DePriest (Charles) of Tupelo, MS; brothers Milton DePriest (Nellie) of Tupelo MS, Ross DePriest III (Doris) of Kansas City, KS; grandchildren Shannon, Cameron, Bryant, Alysha, Spencer, Taraji, Onanti, seven great grandchildren; extended family Amber, Braxton, Lila Grace Welch and a host of nieces, nephews, and cousins.

Send flowers to the DePriest family.