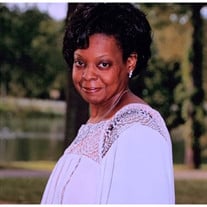 With deepest sympathy we remember Mrs. Demetria Lynn Washington... Demetria Lynn Washington was called home to be with the Lord early Wednesday morning, November 6, 2019.  She was born June 1, 1974 to Jessie Lee Sykes, Jr. and Susie A. Kirk Sykes at North Mississippi Medical Center in Tupelo, MS. She accepted Christ at an early age and joined Church of Christ in Tupelo, MS.  She graduated from Tupelo High School Class of 1992 and went on to further her education at Itawamba Community College Tupelo Campus earning a degree in Business Administration in 1995.  She also studied business at  Mississippi State University and graduated class of 1998.  She worked for Sam's Club beginning in June 1996 and grew with the company.  At one time she was the General Manager of the store in Douglasville, GA.  After traveling many years with Sam's Club she wanted to settle down and in the years to come she made her way back to Mississippi. In 2013 she started a new journey in life.  She joined St. John M.B. church in Shannon, MS under the leadership of Pastor David Walker.  She was a faithful member and worked hard with the church until her health would no longer allow. July 14, 2013 she married life long friend Homer Washington, Jr.  Demetria and Homer's marriage was blessed with two children. She leaves her husband Homer Washington, Jr.; three sons Markel, Matthew, Zaccheaus and one daughter Madison; father Jessie Lee Sykes, Jr.; mother Susie A. Kirk Sykes; sisters Juanita (Nene) Sykes, Juana (Coco) Sykes, brother Bryant Kirk; her in-laws Homer Lee Washington, Sr. and Linda Fay Washington and a host of aunt, uncles, nieces, nephews, other relatives and friends. Celebration of Life: Saturday, November 16, 2019 @ 11 am, St. John M.B. Church, 166 Barbee Street, Shannon, MS Expressions of sympathy may be left on Facebook at N.L. Jones Funeral Directors. "A Pillar of Strength in Time of Need."

The family of Demetria Lynn Washington created this Life Tributes page to make it easy to share your memories.

Send flowers to the Washington family.