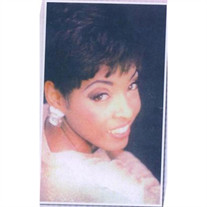 The immortal existence of Alicia D. Morris Smith became a reality on Saturday, June 12, 2010 at 12:30 p.m. at the University of Michigan Hospital. Born November 12, 1967 in Tupelo, MS to the parentage of Otis and Frankie Morris, Alicia was reared and nurtured in a Christian home. Alicia acknowledged the need for salvation at the age 12 and accepted and received the Lord Jesus Christ as her Savior at Calvary Baptist Church in Okolona, MS under the leadership of Dr. James Leodis Tucker. At Calvary Baptist Church, Alicia discovered her God-given vocal talent of singing, speaking, inspiring and uplifting all with whom she came in contact. Her oratorical skills were realized as she was acclaimed the highest honors at the Spring Hill District Oratorical Contest, The State Sunday School Congress of Christian Workers, The General Progressive Baptist State Convention and The National Baptist Convention of America, Inc. Alicia's life touched so many people that it would be impossible to estimate her influence. Through her talents and abilities she attained many honors and accolades that include: Miss Elks, 1986 Henry Hampton Elks Lodge Kissia Clifton Chapter and runner up in Miss Hospitality Pageant, 1989 Tupelo, MS. In 1992, Alicia became the first African American female to proudly adorn the title of Miss Tupelo. Consequently, she was a participant in the Miss Mississippi Pageant in which she received a scholarship for her vocal talent. Alicia received her formal education in the public school systems of Okolona and Tupelo, MS. She attended Mississippi State University in Starkville, MS where she graduated with a Bachelors degree in Fashion Merchandising and a Masters of Art in Business Administration. At Mississippi State University, she was awarded a scholarship and an appointment to the Holmes Scholar Network. In this position she traveled extensively throughout the United States collaboration with administrators of high schools and universities to enhance educational opportunities for students. Furthering her educational and career aspirations, she accepted a position at University of Alabama-Birmingham (UAB) as an ambassador for the UAB Division of Student Affairs. To this end, she served as the representative for the Inter-fraternity, the National Pan-Hellenic and the Pan Hellenic Councils where she mentored and advised the members of Greek fraternities and sororities. Alicia was united in holy matrimony to Richard L. Smith, II. To this union two boys were born: Richard L. Smith, III and Zachary Tyler Smith. Alicia was known for her innate ability to encourage others to reach their full potential. She was empowered to excel in her professional career that began at Ameritech. Being recognized for her leadership skills as high-potential manager, she was accepted into the Ameritech Leadership Development Program. As an employee of AT&T, Alicia was Sr. Labor Relations Manager. In this role she was an arbitrator between the Company, local unions and employees in which she negotiated settlements and resolved issues on behalf of the company. Alicia was loyal member of Second Baptist Church of Ypsilanti, prior to joining Second Baptist Church of Ann Arbor where she was also active, capturing hearts of many with her inspirational and melodious voice of gospel renditions. Alicia served in the Missionary Outreach Ministry (delivering motor meals), the Women's Fellowship, and was a member of the Voices of Praise. Those left to rejoice in the promise of eternal life are her loving and dedicated parents, Mr. Otis and Mrs Frankie Morris of Tupelo, MS; two brothers, Mr. Reginald Terrell Morris, Sr. (Lynnette) and Mr. Otis Marlo Morris, Jr. of Kansas City, MO; two sons, Richard L. Smith, III and Zachary Tyler Smith and their father Mr. Richard Smith of Ypsilanti, MI; an uncle Mr. Horace Morris (Varis) of Batesville, MS; a great uncle Reverend Spencer Houseworth and great aunt Mrs. Geneva Dent of Jackson, MS; godmother Mrs. Geraldine Gillespie of Tupelo, MS; a very special friend Ms. Johanna Evans of Ypsilanti, MI.

The immortal existence of Alicia D. Morris Smith became a reality on Saturday, June 12, 2010 at 12:30 p.m. at the University of Michigan Hospital. Born November 12, 1967 in Tupelo, MS to the parentage of Otis and Frankie Morris, Alicia was reared... View Obituary & Service Information

The family of Alicia Morris-Smith created this Life Tributes page to make it easy to share your memories.

Send flowers to the Morris-Smith family.